Flooding has always been a major cause of natural disasters in a mountainous country like Nepal. Among the many natural disasters that affect Nepal, the recurring floods during the monsoon season have catastrophic consequences every year. Nepal’s fragile geological conditions and complex topography combined with frequently occurring extreme rainfall during the monsoon poses risks to communities living along the flood plains. In order to ensure good flood management practices and the development of long-term water management strategies a good understanding of key hydrological processes and the ability to simulate future changes in streamflow is a prerequisite.

During recent years, FutureWater has done many projects in collaboration with NGO’s, INGO’s and academic institutions in Nepal. This is the first time FutureWater collaborated with the Institute of Forestry (IOF), Nepal to provide their teaching faculty and researchers a training on “Use of open source platform for hydrological modelling of data sparse region in Nepal”. The Tailor Made Training (TMT) was fully funded by  NUFFIC’s Orange Knowledge Programme (OKP) and took place from 8 April to 24 April 2019 in Pokhara, Nepal.

Essential skills, in particular modelling of hydrological processes are currently lacking at IOF, hampering the capacity to gain deep understanding of the present and future flood management situation in the region. Therewith IOF faces difficulties in developing long-term strategies to deal with climate change impacts for Nepal’s water resources. Further, the lack of ground-based measurements in the Himalayan region imposes an additional level of complexity while modelling the hydrological characteristics of this region. The use of readily available open source satellite-based data can augment the limited ground-based observation in the region.

This training was attended by sixteen researchers (seven female and nine male) from IOF, Department of Hydrology and Meteorology (DHM), Central Department of Hydrology and Meteorology (CDHM), Department of Forests and Soil Conservation and the Institute of Engineering (IOE). The overall objective of this training was to ensure the use of open source data in the Google Earth Engine (GEE) platform for to assess the hydrological regime of data sparse regions in Nepal. The participants used freely available geospatial images to make a land use map of their region of interest using the GEE platform. Further, they used these land use maps to understand the changes the hydrological regime of their region using the SPHY hydrological model, developed by FutureWater. The SPHY model can be applied by a wider range of experts with basic hydrological and computer skills, through user interfaces, including a data preprocessing tool.

Moreover, the participants were able to extract and process the projected future precipitation and temperature data using KNMI Climate Explorer. Participants used the delta change method to create the future climate change scenarios. They were able to use the future projected climate data with SPHY model to assess the climate change impacts on the hydrological regime for their region of interest

Overall, the training fulfilled all the needs of the IOF, and was positively evaluated by the participants. This training program has encouraged the faculty members from IOF to use open source data and platforms in their future research and teaching .More information about the SPHY model as well as model documentation, tutorials and software downloads can be found on the SPHY website. 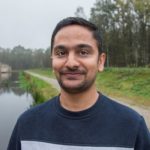