A stakeholder meeting on Glacio-hydrological modelling and IWRM planning for a sub-basin in Bhagirathi Basin, Uttarakhand was organized on 25 November, 2022 by FutureWater and project partners, in collaboration with the Swiss Agency for Development and Cooperation (SDC) and the Government of Uttarakhand in Dehradun.

SDC, as part of its strategy on climate change adaptation, has been partnering with the national and the sub-national governments of the Himalayan States for water resources management. SDC is supporting the operationalization of climate change adaptation actions in the State of Uttarakhand through the “Strengthening Climate Change Adaptation in Himalayas (SCA-Himalayas)” project during 2020-24. The project works in close collaboration with the Directorate of Environment Conservation and Climate Change, Government of Uttarakhand.

The accelerated rate of glacial melt in some of the important glaciers in Uttarakhand will have serious consequences for the freshwater ecosystems in the downstream river basins. The water demand is growing across all sectors- agriculture, industrial and domestic. The variability and uncertainty in water availability and increased demand across sectors raise concern among stakeholders and policymakers. To ensure water security for all in India, and in particular Himalayan states, Integrated Water Resources Management (IWRM) is the key solution. To cover the ambitious objectives on an IWRM, a consortium of national and international experts from FutureWater, Utrecht University from the Netherlands, University of Geneva and The Energy and Resources Institute (TERI), India was mandated to develop a glacio-hydrological and a water allocation model with focus on Dingad Catchment (encompassing Dokriani glacier) and Bhagirathi River Basin in Uttarakhand to support development of an IWRM plan.

The objective of the stakeholder meeting was to present the progress on various activities such as glacio-hydrological and water allocation modelling, analysis of various adaptation options and development of a web-Decision Support System (DSS) to support preparation and implementation of the IWRM plan. 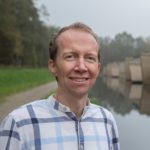