The Nile Basin Decision Support System (NBI-DSS) will provide the necessary knowledge base and analytical tools to support the planning of cooperative joint projects and the management of the shared Nile Basin water resources on an equitable, efficient and sustainable manner. FutureWater was asked to support this NBI-DSS and to undertake preliminary data collection and compilation.

The developed data base has two main components: spatial data and point data. Regarding the spatial data the following data have been made available

These data are available over the entire Nile Basin and include a extensive set of attributes. Data have been quality controlled and is ready to apply in the DSS and can be used for various types of hydrological models.

The point data includes over 20 million records from various sources included global and local data sets. Data are stored in PostGreSQL. The data can be considered as the most complete hydro-meteorological dataset available for the Nile so far.

Kenate River is one of the permanent streams draining the Imatong Mountains at the southern border of South Sudan. Administratively the river’s catchment area falls within Torit, Lopa/Lafon and Ikotos Counties of Equatoria State (EES). Torit Township a fast growing urban centre and its demand for domestic water development is sharply increasing. With the settlement of returnees throughout Kenate Catchment also the demand for rural water supply water is growing fast. As a result of uncontrolled opening of new farms in the upper Kenate Catchment, the vegetation cover in the better rainfall areas is under pressure. This together with the fact that valley bottom farming is upcoming in the middle Kenate Catchment , makes that the water supply of downstream population is at risk of deregulation.

As there is an urgent need for informed decision making in ongoing and upcoming land and water resource development plans, the governments of South Sudan and the Netherlands (GoN) initiated a program for the Water Sector in Eastern Equatoria State (ProWasEES). It aims to contribute to a situation whereby: i) water-related natural resource conflicts are minimized and ii) the population of EES have access to safe drinking water and certified sanitation facilities. Focus will be on the Kenate River which is one of the permanent streams draining the Imatong Mountains at the southern border of South Sudan. Kenate Basin falls within Torit, Lopa/Lafon and Ikotos Counties of Equatoria State.  The overall objective of this program is that “Kenate Watershed is managed in an integrated and sustained manner”.

In order to reach this objective there is an urgent need for an integrated land and water resource management (ILWRM) model for scenario development, which FutureWater will develop. Initially it will operate with a limited amount of local data, combined with global public domain data. Data collection for further fine-tuning can follow during operationalizing of the model.

The countries included in the Nile Equatorial Lake sub-basins face an ever increasing pressure on land and water resources, together with rapid population growth. As a result, food production is one of the main concerns and priorities of policymakers in the area. Irrigation and improved water resources management have the potential to boost agricultural productivity in the area, currently almost entirely rainfed. Irrigated crop yields are much higher than rainfed yields, which means that there is a high potential to increase food production in the area.

FutureWater, in collaboration with WaterWatch, will assess the irrigation potential of seven Nile countries in order to fill gaps in the NBI and member country information based on agricultural use. This study consists of several consecutive steps, in which hydrological modelling, the use of remote sensed data, ArcGIS analyses, consultation workshops and meetings form the core of the project.

The specific objectives of this project are: 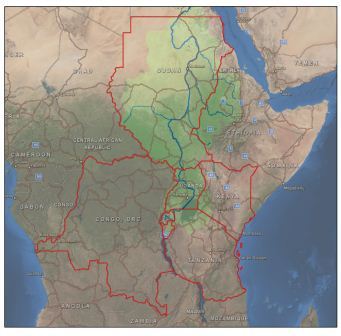 The assessment of the Irrigation Potential study resulted in a irrigation suitability map. This map can be downloaded as jpeg or as GeoTIFF. Click on the links below to download the suitable format: